This issue concludes the detailed unit history of 8th Oxfordshire & Buckinghamshire Light Infantry by Tony Richards – started in issue 6 – which continues with more on the Battalion’s role in the First Battle of Doiran to demobilisation in 1919.

Kassandra and airship operations in the Salonika Campaign

This fascinating article on the activities of RNAS airships operating out of Kassandra on the Halkidikki Peninsula is supported by a photograph of an SS class airship at Kassandra, an RNAS-manned anti-aircraft gun and RFC aerial photographs of Kassandra.

An article on Le Memorial du Front d’Orient and their invitation in 2002 to the SCS to attend November 11th ceremonies in Paris. Philip and Janet Barnes represented the Society at the events on the 11th and a reception and a wreath-laying organised by the Yugoslav Embassy, with other local events, on the following days. The article is illustrated with photographs.

A continuation and completion of the article on the Battalion which was formed in 1914, arriving in Salonika in November 1915, where it was the 26th Division’s pioneer battalion. The article describes its role in the First Battle of Doiran and its aftermath in April/May 1917, with eye-witness accounts by L/Cpl William Mather (C Company) and an extract from the unit’s war diary. Very usefully there is a fold-out, A3, 1:75,000 map of the Doiran Front, showing the area most associated with the Battalion in 1916-18. The story continues with anti-mosquito activities and road construction, sports and a spell in the front-line trenches and their part in the final advance in September 1918. With the rest of 26th Division, the Battalion occupied Bulgaria, before starting demobilisation in January 1919. There are more accounts by William Mather and a fine photograph of the Battalion’s machine gunners in 1916.

SCS Annual Meeting and Wreath Laying at the Cenotaph, 11 October 2003

Following the wreath laying at the Cenotaph, members met at the Florence Nightingale public house near Westminster Bridge. There they enjoyed a talk by Viv John on the Royal Artillery in Macedonia. 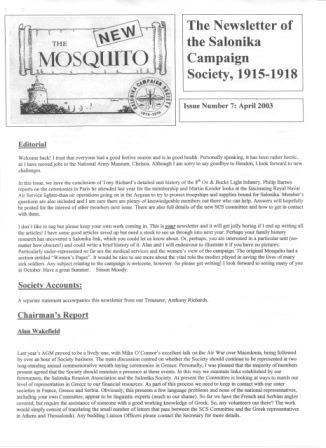