Browsing through back issues of The New Mosquito I came across an article about members of the Highland Mountain Brigade (TF), RGA, celebrating Hogmanay in 1918.

NM18 (September 2008) contains a fascinating article by Commander Ian Hamilton – Bulgaria and After – describing the activities of members of the Brigade after the armistice, from diaries and letters. 1918’s Hogmanay celebrations in Salonika are described in a letter written by Gunner McNab shortly after.  It seems appropriate to quote the letter in part here, on the centenary of that Hogmanay:

… I can say it has been the happiest New Year I have had on Active Service. Eighty Scots boys of the Brigade had an invitation from the Scottish Women’s Hospital (SWH) at Salonique to a spread and concert on Hogmanay and I was amongst the crowd … After the cup that cheers had gone round, accompanied with lots to eat in the way of sandwiches, scones, cakes we had an entertainment which is easily the best since leaving home. The orchestra was first-class, the first selection being “Poet and Peasant”. The fourth item was “My Ain Folk”. It was a Scottish lassie who sang with such feeling, as if she would have liked to have been with them and I have no doubt she would. She sang the last verse over again in answer to an encore.

The sketches were splendid, the participants being members of the SWH …

The hour of midnight was struck by the drummer on one of his cymbals and the hall rose en masse and with hands clasped sang “Auld Lang Syne”.

… after the singing of “Auld Lang Syne” a cup of cocoa was handed round accompanied with shortbread. The SWH did everything they could to make us happy and it was so nice to forget all about Army discipline for a few hours.

Wasn’t it good of them giving such a good time to the boys and finding motor transport for us too. We arrived back in camp, a distance of about ten kilometres, about two in the morning.

Commander Hamilton also provided a copy of the evening’s programme which I reproduce here: 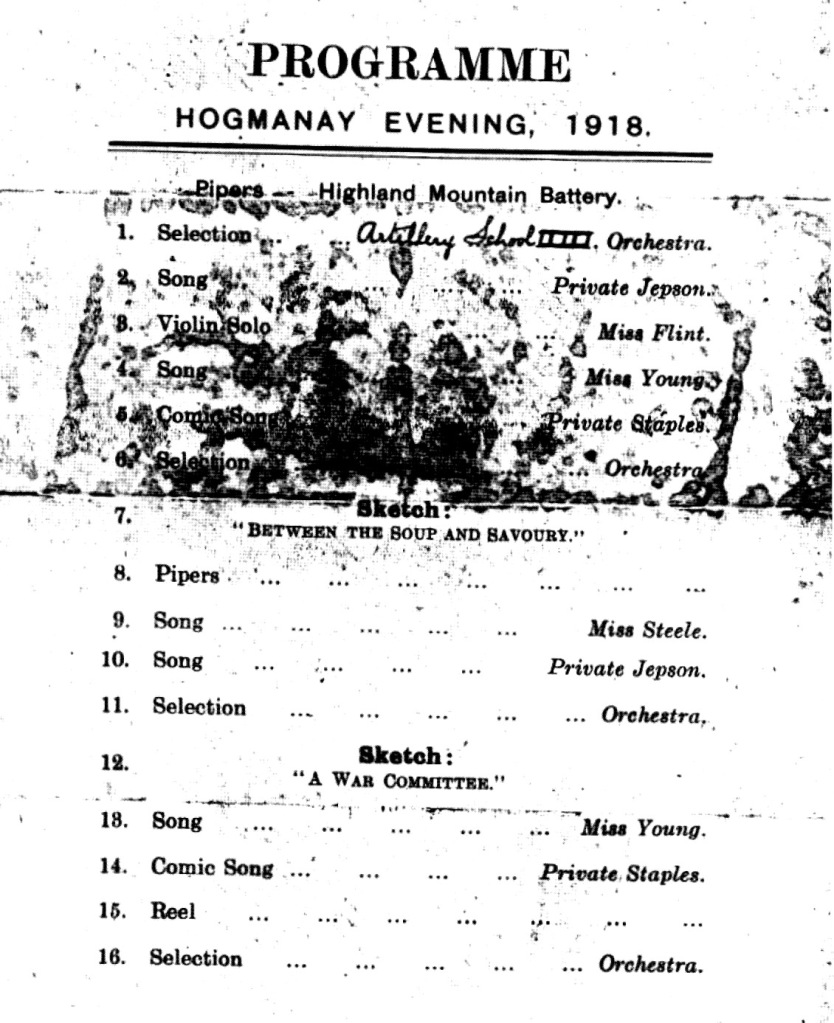 Commander Ian Hamilton was a remarkable gentleman who died in 2014 at the age of 103. A member of the RNVR and then the RN, he saw Second World War service in the Atlantic, the South Atlantic, the Mediterranean, the battles of Taranto and Matapan and the D-Day landings as well as the Arctic convoys. For this latter service he was awarded the Arctic Star in 2013. Although his final years were spent in Erskine, until 2011 he lived in Rothesay, Isle of Bute. I am grateful to the Secret Scotland website for providing these biographical details.

I was editor at the time Commander Hamilton submitted the article and had a brief correspondence with him but, sadly, cannot now say what connection he had with the Highland Mountain Brigade. Bute provided a Territorial Force Mountain Battery so either it was a matter of local interest or maybe a family connection. You can read more about the Territorial Mountain Batteries on The Long, Long Trail website.