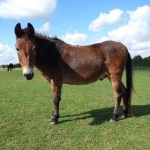 If you are a regular visitor to this web site, or you read our excellent journal, The New Mosquito, you will know that at the start of the centenary we ‘adopted’ Muffin, a rescued mule at a Norfolk horse sanctuary. This is in recognition of the vital role played by mules in the campaign, by keeping the troops supplied and evacuating casualties. We have received this news about Muffin from Redwings Horse Sanctuary …

As you may be aware, Muffin is our longest serving Adoption Star having joined the Redwings Adoption Scheme in 1987 shortly after his arrival at the Sanctuary. This year [2017] Muffin celebrated his 30th birthday and, while he remains in good health for his age, we have decided it is the right time for this handsome chap to take a step back from the limelight and retire from the Adoption Scheme.

Muffin’s retirement does not affect your sponsorship of him; it simply means that he will no longer be available to new adopters. You can continue adopting him as before, and you will still receive updates from Muffin on his latest adventures. You will also still be able to visit him at Redwings Caldecott every Friday, Saturday, Sunday and Monday, as well as attend his birthday party.

This very special mule has provided his supporters with a huge amount of pleasure over the last 30 years and I hope he will continue to do so for years to come as he enjoys a very well-earned retirement.

The SCS will, of course, continue to adopt Muffin and we send him our very best wishes for a long and happy retirement. We are proud to have him as an Honorary Member with the special membership number, ‘Salonika 4’.

It is a sobering thought that a long life – including ‘retirement’ – was unlikely for most of the thousands of mules and horses of the BSF. George Armour, horseman, distinguished equine artist and officer in the Army Remount Service describes their fate in his autobiography, Bridle and Brush (Ashford Press Publishing, Southampton, 1986, p.296):

It was a very distasteful thing to have to sell these animals into the slavery which would inevitably be their fate, but there was no alternative. Orders were issued and carried out that all over sixteen years of age should be destroyed, a well-intentioned thought though hardly logical, as the younger the animal the longer would be his time of suffering. The heavy draught horses were unsaleable, as what one of them required in the way of food would have consumed all there was to keep the other animals on a farm alive.

Army Veterinary Corps staff tying an obstinate [unfair!] mule to a post before attempting to shoe the animal at a British Army veterinary hospital near Salonika, April 1916. THE BRITISH ARMY IN THE MACEDONIAN CAMPAIGN, 1915-1918 (click image to see full size) © IWM (Q 31913)