Members should have received this latest edition of The New Mosquito, by now. Please contact the Society if you are expecting a copy, but haven’t received it.

Owning the Night: The Scout-Snipers of the Scottish Horse in Salonika

An article on the Scottish Horse Scouts from the South African War to their last few months of war on the Western Front, with a detailed examination of key Scout actions and characters in Macedonia, where they served in the Struma Valley with 27th Division. The article also compares and contrasts scout-sniper tactics in Salonika with those of leading Scout-Observation-Sniper proponents on the Western Front and looks at parallels with modern-day special forces/reconnaissance unit dogma. This is an excellent follow-up to Ann Walker’s article in NM34, 4034 Trooper James Scott Anderson, 1/2 Scottish Horse.

By Ian and Liz Taylor

S/26737 Private John H Millard served with 4/Rifle Brigade (27th Division) in the Struma Valley from the end of 1916 to 1918, when he was captured by the Bulgarians, finally being repatriated to the UK in December 1918. The article is illustrated with a map and an interesting selection of photos, including several from the Royal Green Jackets (Rifles) Museum in Winchester.

A Signaller in Salonika (the Diaries of Edwin Trounson) Part II

This is the second of four articles drawing on the diaries of Lance-Corporal Edwin Trounson, who served as a signaller with 10/Devonshire in the Macedonian campaign, and is illustrated with group photos showing Edwin’s platoon from A Company and the Battalion signallers, both taken in 1915 in the UK.

A description of the organisation, activities and challenges of the Army Veterinary Corps in the Macedonian campaign.

An update on Muffin, the Society’s adopted mule who resides at the Redwings Horse Sanctuary, followed by details of a fascinating new book, The Mule in Military Service by Dr Anthony Clayton.

Following the wreath laying at the Cenotaph, members will meet at the Civil Service Club., which will include a talk by Sir Michael Llewellyn-Smith KCVO, CMG. 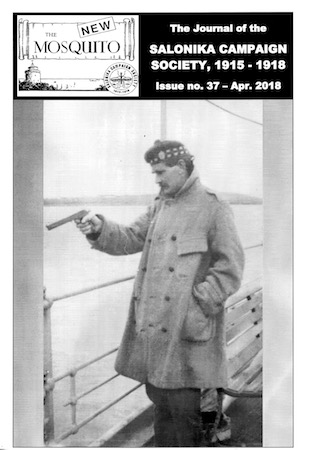